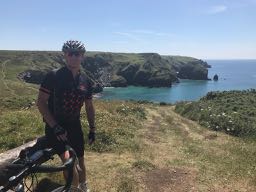 I was reading that the biggest barrier to people taking up cycling was fear of injury on our roads. So while the statistics show that the average cyclist would need to ride 1,000,000 miles before injury caused by another road user (by the way the odds of serous injury through collision with a pedestrian is on par with being hit by lightening) there is a fear culture that seems to have somewhat gripped our nation.

The stark reality is that 85,000 are dying prematurely in this country due to our sedentary lifestyles in the form of cancer and cardiovascular problems (obesity has recently overtaken smoking as the main cause of cancer). These conditions have also been linked to a worse outcome from Covid-19, with a shocking fact that in 2018/2019 , 25% of all hospital admissions were due to obesity related illnesses.

We have known it for some time, and the government seems to have finally cottoned on. Cycling really a solution, or at least part of it.

I asked a few people about the health benefits of cycling, and below are a few comments. I was interested to hear that it is not just physical health, but also mental health that improved.

Weight Loss
“I went from 16 stone to 14 stone and just able to do 6 miles to Deloitte Rab in a year age 49 and raised £10K for Wiltshire air ambulance”. Andrew warminster

Helping Overcome Grief
“Buying an bike and completing Ride Across Britain were some of the best decisions I ever made. I overcame grief, inspired my family and discovered a strength I didn’t know I had”. Kathryn, London

Fundraising while minimising the risk of Diabetes
“I bought a road bike 18-months ago after having had a hybrid. With the hybrid I’d ride 20 miles and be ruined the next day; 3 months further on and I was given the fantastic opportunity to ride for the Balfour Beatty team, raising £5,800 for my chosen charity (Team raised over £200K!); 18 months later and I’ve completed a longest/highest ascent double solo ride of 125 miles and 11,020ft, completed my highest single climb of nearly 3,400ft but perhaps more importantly made lots of new friends, enjoyed great rides and experiences, lost over 2.5 stone, joined a local cycling club. The health and fitness gains are important though, and I hope will keep the weight off and minimise the risk of developing type-2 diabetes which has affected my family”. Mark, Halifax

Health, Emotional Wellbeing and Mindfulness
“I got back into cycling at the grand old age of 55 (I haven’t been on a bike with gears before – the last one was a Chopper!) after a particular emotional and stressful period of my life and found a whole new world of health wellbeing, mindfulness and making some amazing new friends along the way…oh and of course being able to eat cake with no guilt or health issues. I love it and go virtually everywhere on my bike now and the best bit is I have raised £2,500 to help health problems, in my case, cancer research, over the last couple of years – what’s not to like”. Sandra, Swinton

Stronger, Faster, Sanity Intact
“I used to ride a lot as a kid. Holidays, to and from school. Then I came back from uni, got a car and just forgot about bikes. I switched jobs in 2012 and when the Olympics happened I got caught by the bug. The ultimate cliche. Started commuting, increasing distance. A disastrous ride to Brighton with a friend (6 punctures, one pissed off wife) meant I got a faster bike, more lycra and worked on my fitness. Lost weight, got stronger and faster. Now I find that it is hard to go without a ride. It’s the only thing that keeps me sane”. Eugene, London