By Alexander Rhodes (he’s the guy on the right) 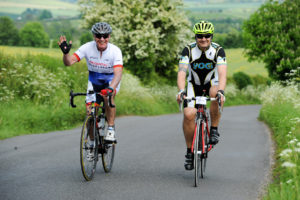 Actually, we are going to need some context here. Back in the early part of this decade, I was post-rave, post-relationship and very much in the era of depression and self-loathing. I knew things were getting out of hand when a friend I hadn’t seen in a while commented via Facebook, with complete sincerity, how cruel it was that someone had “Photoshopped my head onto that obese body.” No such manipulation had taken place. This was exacerbated weeks later when popping in to see an old clubbing acquaintance at their place of work. He looked at me open mouthed and, shaking his head, muttered the immortal words, “My God, what happened to you?” Things had to change.

I am a single-minded and determined character. If I decide on something, it is often taken up with 150% commitment, within minutes of making that decision. Even so, had you have told me that in just short twelve months I would be cycling the welsh hills in the pouring rain, completing a 101-mile course in just 6 ½ hours I would have thought you in some way deranged. So back to the story……

I am bleary eyed and disorientated. The alien sound of my smartphones alarm confuses me. I don’t set alarms as a rule. As the world comes into focus I jab at the smartphone screen to silence the sounds of “Rousing Forest”. I am awake. Not as a result of all night partying and copious chemicals coursing through my veins as would have been true the year before. No! The reason for my early start is sat in the spare room downstairs. I have bought a “racer”.

For the younger readers of these ramblings, a “racer” is the anachronistic title given to what you would call a “Road Bike.” This is the first push bike I have owned in the best part of 26 years. The last being a mail order mountain bike which I used to ride to work in my early 20’s. (I should point out that I had not, at this juncture, referenced a cycling magazine, googled any kind of background information or studied any forums. For the older readers, a forum is one up from Ceefax and Oracle. For the younger readers, it is where retired people go to moan).

The “Racer” in question was purchased from a high street retailer for a ridiculous £350!! Who would ever dream of spending so much on a bike! My shopping trip had revealed exotic machines of £1000 and more. I could not ever see me spending this much on a “Racer”. It had taken me all summer to save up the £65 required to purchase my last one.

It is my new year’s intention to ride this bike today, whatever the weather and accomplish a massive 10-mile ride! Yes, you heard me correctly. 10 miles! I know right? 10 whole actual miles. It is ridiculous, but I am sure I can do it. I am excited, scared, I feel like I am about to embark on some foolhardy, epic voyage into the unknown. TEN MILES! Even the horizontal rain that drums violently onto the window and the foreboding howling wind will not be stopping me. In fact what stops me, in the end, is me. Around 2 miles in, huffing and puffing, red-faced and heart pounding in my chest, I see the city border and beyond it, the wild green countryside of rural Devon.

I feel the security of the city and its hustle and bustle tugging at my ankles. The harsh, cold wind and driving rain lash out at me with ice like talons as if to warn me of my impending doom. Basically, I bottle it. I turn the bike around and, consoling myself that to ride 10 miles on a “racer” is the preserve of fools and super-humans, I slowly grind my way home. 4 miles completed, I collapse into a heap with a hot coffee and a laptop. I decided that I should start researching cycling with a view to improvement.

One of the single most influential web hits on that fateful day was the discovery of Strava. I was excited by the idea that I could track my progress and see how my ride had gone. Even more excited that I would be able to compare previous efforts and the efforts of other people in my network. I downloaded the app to my phone and tentatively filled in some details. I then, as instructed, searched for friends who also used this app. A few tenuous acquaintances were suggested. One was a middle-aged man that I kind of know through a social network and that I surmised, was about my level of fitness. I looked at his rides. I was blown away. 42 miles!! Surely that was kilometres. No. It is miles. He managed this feat of athletic prowess in just over four hours. That is incredible! How on earth had he managed this?

I spent the rest of the day visiting cycle blogs, articles and magazines. It was at some point mid-afternoon that I hit a site dedicated to the Tour De France. Needless to say, the numbers that I saw there rendered me speechless. I had not even realised that a human could achieve such levels. It had also become increasingly obvious that a 60 to 80-mile ride was deemed to be a reasonable weekend jaunt for a considerable number of everyday people. Right there and then I set my goal. I would get comfortable with my bike. I would spend a couple of weekends addressing some of the obvious issues that I was becoming aware of through my reading, largely concerning kit, diet and personal motivation. I would then head out with a local club. I was going to ride 25 miles. I was going to achieve this before the end of February and, before the end of spring, I was going to hit 50 miles.

So much of human ability is set by our attitude. As a diploma qualified hypnotherapist, I am well aware of how positive mental attitude, re-framing and peer group influence can shape our reality. If I want to achieve certain goals I have to first adopt the can-do attitude. Then I to visualise the success and believe it be unequivocally possible. To do this it is wise to surround one’s self with the right people. Not the naysayers or the ridiculer’s. We have friends and family for that! Rather, with the people that share our aspirations and see our goal as a viable and achievable norm. All that we have to do then, in the most simplistic of terms and with no nod to Nike intended, is Just do it!

You can keep abreast of the unfolding story of how a middle-aged, ex-drug using, lard arse succeeded in changing his perception of what can be achieved on a bike by following this blog. This feed will divulge cycle hacks and shortcuts, inspirational tales, bike purchases, more bike purchases, honest and frank confessions and hopefully a few laughs too. As well as my Cycling stories, it will provide friends cycling stories, your cycling stories and cycling videos too!

This place is a celebration of cycling. It is the home of Silverfox Cycling Club. It is where you will find inspiration, consolation, celebration and delectation in cycling form. It is for the MAMIL’s and MAWIL’s everywhere as well as the younger cyclist who would like a different perspective. It is for the racing snakes and the overweights. The cycling elite and the cycling in defeat. Full of sweat, grime and hard work, it is cycling in its purest form. It is because weridebikes.net. We hope you will enjoy it.