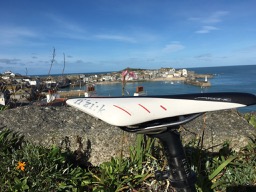 The villa is set on the outskirts of a small town, Dolores, surrounded by fields; we are in the heartland of orange groves and lemon orchards. It’s clean, quiet and tastefully decorated with a view to calmness and tranquility.  The only sounds to break the silent are of cicadas and the screeches of diving swallows.

Our first ride was a relaxed 20 miles, just to stretch the legs, to test the bikes and make sure that everyone is made aware of the rules of Spanish roads; unlike the UK, the drivers are courteous giving copious space and the occasional wave. Every major roundabout has a segregated path for us cyclists. We cycle on the right and are given more leeway than expected.   It feels and is safe.

Our second ride, again gentle, included the obligatory cafe stop for tortilla (omelette) and Cortado (a short, milky coffee). A few steady climbs, nothing too testing, and the smoothness of the tarmac makes hills easy going.  The 40 miles felt significantly less than at home, and so decided to have a small detour to introduce ourselves to the sea.

Now you may think of this part of Spain as “bustling”, but it is far from that…empty roads, empty beach, however with good company, the sun doesn’t go down alone (apologies for the homage to Don Henley).

Mid-afternoon is for chilling; we help ourselves to a small cerveza and muse over today’s ride, while talk turns to dinner with the promise of local tapas.